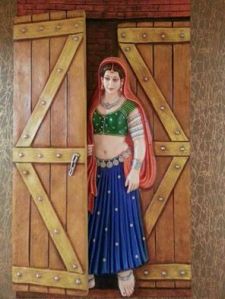 This is what village ladies used to wear.

World people must understand the importance of natural forces and its devastating powers if not used properly. Solar energy is alternative source of many other forms of energy. There are hot water streams in oceans which are responsible for climatic changes. Too much heat generated by heavy industrialization can also drastically change our climate. In non earth quack zones some other form of housings  at least for poor can be possible instead of using cement and steel. This could save lot of money and environment and less carbon dioxide emission. Progress at the cost of environment would harm us in the near future.

The WordPress.com stats helper monkeys prepared a 2013 annual report for this blog.

The concert hall at the Sydney Opera House holds 2,700 people. This blog was viewed about 10,000 times in 2013. If it were a concert at Sydney Opera House, it would take about 4 sold-out performances for that many people to see it.

“What is truth?” is a very simple question.  Of course, answering it isn’t so simple.  We can offer definitions like “Truth is that which conforms to reality, fact, or actuality.”  But this basic definition is not complete because its definition is open to interpretation and a wide variety of applications.  What is reality?  What is fact?  What is actuality?  How does perception effect truth?  We could offer answers for each of these questions, but then we could again ask similar questions of those answers.  I am reminded of the paradox of throwing a ball against a wall.  It must get half way there, and then half way of the remaining distance, and then half of that distance, and so on. But, an infinite number of halves in this scenario never constitute a whole.

Therefore, it would seem that the ball would never reach the wall if we applied the conceptual truths of halves.
The ball-against-the-wall scenario simply illustrates that defining and redefining things as we try to approach a goal actually prevents us from getting to that goal.  This is what philosophy does sometimes as it seeks to examine truth.  It sometimes clouds issues so much, that nothing can be known for sure.
But, even though it is true that an infinite number of halves (1/2 of “a” + 1/2 of the remainder + 1/2 of the remainder of that, etc.) does not equal a whole, we can “prove” that it does by simply throwing a ball at a wall and watch it bounce off.  Actually, the “1/2″ equation above does not equal a whole — mathematically.  The problem is not in the truth, but in its application as is often the case with philosophical verbal gymnastics.

Again, what is truth?

If there is such a thing as truth, then we should be able to find it.  If truth cannot be known, then it probably doesn’t exist.  But, it does exist.  For example, we know that it is true that you are reading this.Is there such a thing as something that is always true all the time?  Yes, there is.  For example, “Something cannot bring itself into existence.”  This is an absolutely true statement.  In order for something to bring itself into existence, it would have to exist in order to be able to perform an action.  But if it already existed, then it isn’t possible to bring itself into existence since it already exists.  Likewise, it if does not exist then it has no ability to perform any creative action since it doesn’t exist in the first place.  Therefore, “Something cannot bring itself into existence” is an absolute truth.
The preceding example is a truth found in logic.  But, there are truths that are not logical by nature.  It is true that I love my wife.  This isn’t logically provable via theorems and formulas and logic paradigms, but it is, nevertheless, true.  Therefore, we can say that truth conforms and affirms reality and/or logic.
Is this what relativism does?  Does relativism confirm to reality and logic?  To be honest, it does to some degree.  Relativistically speaking, there is no absolute right or wrong regarding which side of your head you should part your hair, if you part it at all.  To this we must concede relative “truths” that are different for different people.  But, these are relativistic by nature.  Examples of relativistic truths are, 1) people drive on the right side of the street in America and the left in England; 2) I prefer to watch science fiction over musicals; 3) snow is better than rain, etc.  These things are relative to culture, individuals, preferences,etc.,and rightfully  so.
If we are to ever hope to determine if there is such a thing as truth apart from cultural and personal preferences, we must acknowledge that we are then aiming to discover something greater than ourselves, something that transcends culture and individual inclinations.  To do this is to look beyond ourselves and outside of ourselves.  In essence, it means that we are looking for God. God would be truth, the absolute and true essence of being and reality who is the author of all truth. If you are interested in truth beyond yourself, then you must look to God.

For the Christian, the ultimate expression of truth is found in the Bible, in Jesus who said, “I am the way, the truth, and the life…”. Of course, most philosophers and skeptics will dismiss His claim, but for the Christian, He is the mainstay of hope, security, and guidance.  Jesus, who walked on water, claimed to be divine, and rose from the dead, said that He was the truth and the originator of truth.  If Jesus is wrong, then we should ignore Him.  But, if He is right, then it is true that we should listen to Him.
The eyewitnesses wrote what they saw. They were with Him. They watched Him perform many miracles, heal the sick, calm a storm with a command, and even rise from the dead.  Either you believe or dismiss these claims. If you dismiss them, that is your prerogative.  But, if you accept them, then you are faced with decisions to make about Jesus.  What will you believe about Him?  What will you decide about Him?  Is He true?  Is what He said true?
Truth conforms to reality.  Jesus and Krishna performed many miracles. —- taken from internet.

I heard the news that one “baba” had a dream that underneath a particular old fort, somewhere in UP there lies monumental amount of gold, one thousand tons. And archaeological survey of india is going to have a ‘dig’  at it. Media is reporting that the team of diggers have already arrived at the said site.

What is this? If the news is right then what the govt. of india is doing. Is this gold finding adventure is govt. sponsored? If it is then we are the most foolish people on earth. Recently “babas” are becoming nuisance to the country.

Error: Twitter did not respond. Please wait a few minutes and refresh this page.

Find not what you seek.forget what you have found.Donot turn back and look.